19 years ago a farmer from Seville asked Todolivo to transform a plantation of crown olive grove with three years and a half trees and a 7×6 m frame to an olive grove in hedge. The company accepted the challenge considering it viable as they were young olive trees, and thus the plantation was transformed into an olive grove in hedge with a 7×1.5 m frame. Nowadays, you can still differentiate the eldest trees by the trunk’s thickness – those being older than three years and a half.

The irrigation installed was drip irrigation releasing 2.3 litres/hour every 0.75 meters. The yearly average water consumption is 1000 cubic metres. The trim techniques are natural, simple and cheap. Maintenance costs do not exceed in this case 1500 €/ha.

These are their production records:

In the same plantation, two years later, Todolivo planted in plowland 9, 40 more ha of olive grove in hedge, but at this time using a narrower frame boasting 4×1,35 m. Later on, in 2002 and 2006, the plantation was enlarged with another two plowlands of the estate, number 10 and 11, with 40 ha each of them, planted using the same frame. The irrigation installation includes a dripping system with diffusers releasing 2.3 litres/hour every 0.75 metres. The yearly average water consumption per ha in these three plowlands attains 2227 cubic metres. The maintenance costs for this plantation frame are around 2500 €/ha.

These are the production records in these plowlands of the estate located in Seville and planted in a 4×1.35 m frame: 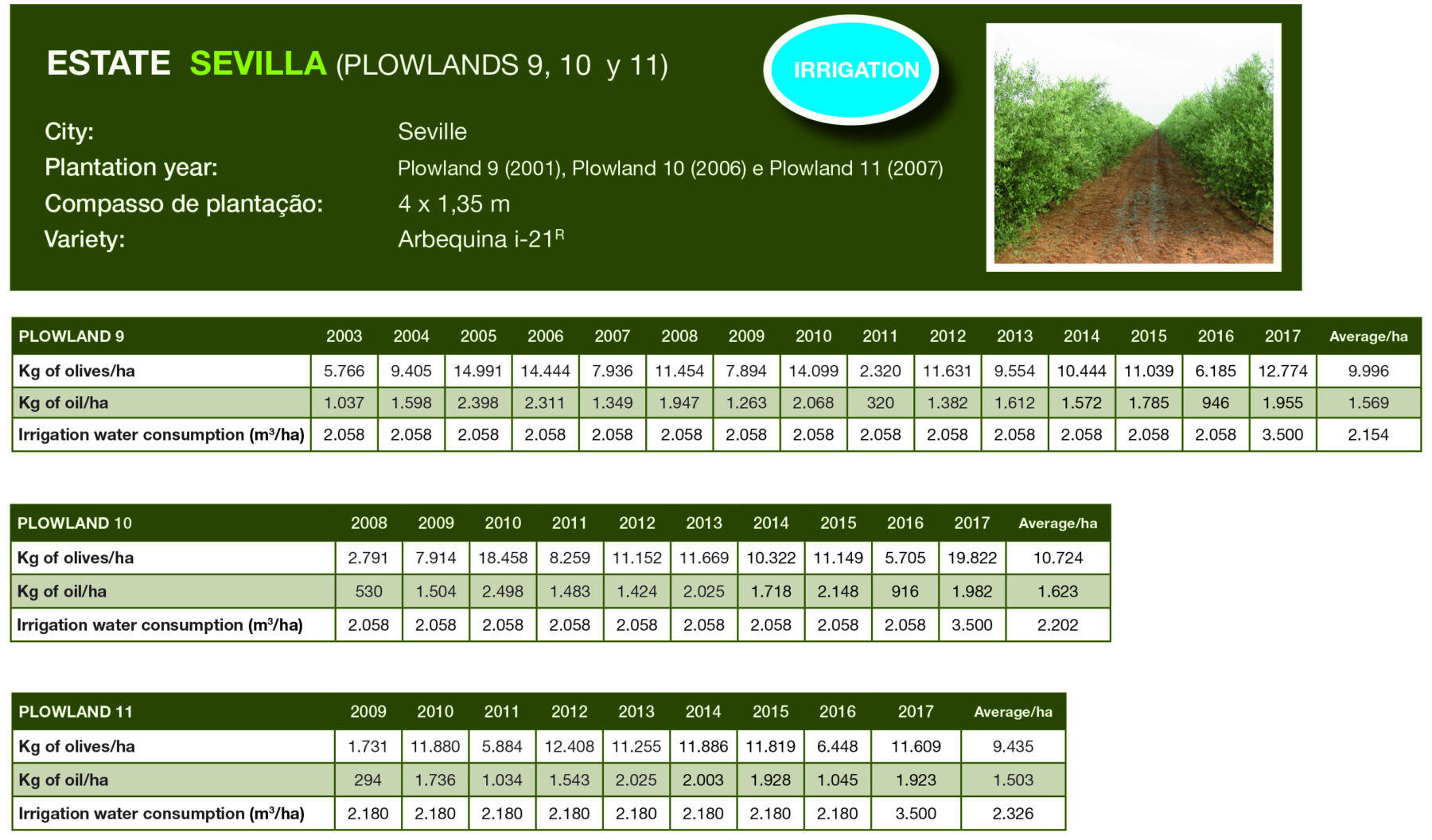 As described in the table below, the average production in kg of extra virgin olive oil per ha is slightly higher in narrow frame plowlands with respect to that with larger frame. Specifically, plowland 9 exceeds plowland 1 in 223 kg/ha; plowland 10 in 277 kg and, finally, plowland 11 in 157 kg/ha.

Nevertheless, if we analyse the investment cost for different plowlands it is proved that in those with the narrow frame (4×1.35m), the necessary implementation cost to do the plantation of the olive grove in hedge was 94% higher than that for the larger frame (7×1.5m).

This big difference arises because narrow frame plowlands nearly duplicate the number of trees per ha (1851 trees/ha), in relation to those with the larger frame (952 trees/ha), so the investment to be made is much higher.

NOTE: When elaborating the economic data of this table, an oil price of 3.75€/kg was estimated

Concerning the maintenance costs, in the large frame plantation they do not exceed 1500€/ha and, however, for the narrow frame plantations they are around 2500€. Namely they need 1000 more Euro per ha. This difference is essentially because in narrow frame plowlands there many more rows and the tree density is higher per ha, requiring a higher water consumption, trim and harvest costs, as well as a bigger number of phytosanitary treatments because the hedge is exposed to a poor lighting and poorer air circulation, therefore, they require a bigger number of treatments.

How does all of this affect profit and profitability? Is it worth assuming higher investment and maintenance costs to produce 219 more kg of oil?

In order to respond to these answers, it is necessary to calculate first the profit and profitability obtained in each plowland. For this calculation, a sale price of extra virgin olive oil has been estimated at 3.75 €/kg. The price being lower, the difference would be even bigger in favour of the large frames.

Once the calculations have been made and the table completed, we can check that the profit obtained in the large frame plowland is more important in 179 € to the average profit got from the other three narrow frame plowlands.

If we study the profitability once the investment has been recovered, it is observed that the most profitable plowland is number 1, with 70% comparet to 57% average got from the others. This proves that in the large frame plowland, we take a bigger profit from the investment and we need to spend a lesser amount of money to get a more important benefit.

This bigger profitability is also reflected in the unit cost. In the table it is observed that in the large frame plowland, a bigger production efficiency is obtained, as this allows to produce a kg of extra virgin olive oil at a cost of 1.11€, compared to the rest of plowlands scoring between 1.59 y 1.66€.

Throughout this study it has been demonstrated that large frames help to take a major advantage of light, as the hedge may be naturally trimmed, reduce investment and maintenance costs and achieve a more important efficiency in production making this cultivation technique be more sustainable and profitable.

Although in this paper the example take has been that of the 7×1.5 m large frame due to its antiquity and background of productions recorded for it and the chance to do the comparisons with the 4×1.35 m narrow frame existing tin the same estate, Todolivo advocates that there is no a specific frame which is valid and works for every estate, but each of them would have their own ideal frames depending on their particular conditions. In fact, the company from Cordoba has many other different sets on which they have been working being more productive and profitable and which are the result from the research process being carried out for the last 20 years.

Nowadays, the most usual irrigation frames in the company have lanes between 5 and 6 metres and the distances between trees are also being enlarged in order to let them grow more naturally. Thus, they can also apply that trim techniques which are being so productive and economic and that they are successfully implementing for the hedge. It is a fact that when enlarging the distance between lines the production of the first harvest is lowered, but from the second harvest on, once the line is formed up, similar oil productions to those for narrow frames are obtained, but in a more efficient and profitable way.

Which is the ideal frame?

In order to define the ideal frame in every plantation, the technical staff at Todolivo carries out first a thorough test on the soil capabilities in which several factors are taken into account – agricultural and weather conditions of the location, the slope and positioning of the plowlands, as well as the varieties to be planted, as they compromise to a great extent the choice of the frame.

Nowadays, Todolivo keeps doing research and has great personnel made up by 110 employees and 15 agricultural engineers specialising in olive groves in hedge boasting the necessary training and experience to help each farmer to get the most ideal frame/s for his/her estate, as well as finding the most recommendable varieties to be planted.

As an example of this tailoring, please find below the production records for three olive groves in hedge irrigation estates planted using different frames:

Posted in:
Tagged with:

This site uses Akismet to reduce spam. Learn how your comment data is processed.